Saved Searches Advanced Search
As of April 10, we are open for drop-in services only. Visits are limited to 15 minutes. Learn about our full list of in-library services.
Returned items: There may be a delay clearing returned items from your account due to a high volume of returns. There are no late fines at Burnaby Public Library.
Print 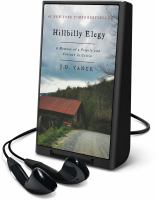 A Memoir of A Family and Culture in Crisis

"Hillbilly Elegy is [an] analysis of a culture in crisis -- that of poor, white Americans. The disintegration of this group, a process that has been slowly occurring now for over forty years, has been reported with growing frequency and alarm, but has never before been written about as searingly from the inside. In Hillbilly Elegy, J. D. Vance tells the true story of what a social, regional, and class decline feels like when you were born with it hanging around your neck. The Vance family story began with hope in postwar America. J. D.'s grandparents were 'dirt poor and in love' and moved north from Kentucky's Appalachia region to Ohio in the hopes of escaping the dreadful poverty around them. They raised a middle-class family, and eventually one of their grandchildren would graduate from Yale Law School, a conventional marker of success in achieving generational upward mobility. But as the family saga of Hillbilly Elegy plays out, we learn that J. D.'s grandparents, aunt, uncle, sister, and, most of all, his mother struggled profoundly with the demands of their new middle-class life, never fully escaping the legacy of abuse, alcoholism, poverty, and trauma so characteristic of their part of America. With piercing honesty, Vance shows how he himself still carries around the demons of his chaotic family history."-- Provided by publisher.
Publisher: Solon, Ohio :, Playaway,, [2017]
Edition: Unabridged
Description: 1 sound media player (approximately 7 hr.) : digital, HD audio ; 3 3/8 x 2 1/8 in
ISBN: 9781509465750
1509465758

This is a riveting memoir of a boy growing up in a dysfunctional family in the rust belt who by sheer will and the love of key family members escaped generational poverty while seeing his mother succumb to drug addiction.
It shines a light on white poverty in the way that Jeanette Walls books did in the starkest terms while showing both sympathy and abhorrence for the cultural seeds of the "hillbilly" culture.
The popular movie on Netflix is fairly faithful to the book and worth seeing.
The book goes into more didactic analysis on the plights of the culture the author came from. The author's family was part of a great migration of poor whites from KY and WV to the industrial midwest, in his case southern Ohio, where the factory base was crumbling and opiate abuse became rampant.
Noting the scree of the one poster, here,yes JD Vance has become somewhat a celebrity in conservative circles by pointing out some liberal, as I am, misunderstandings, and similarities in Appalachian poverty that heretofore has been just made a black/white dichotomy, but he is as critical of the grievances of the MAGA crowd, noting thgere propensity for conspiratorialism, as he is sympathetic with their plight, one he shared.
The book is well written.

This insufferable snot wants to be known as a blue-collar author of autobiography about "white economic anxiety," and as a 'warrior' in the opiate 'war.' He got rich mainly off exploiting his white trash family's drug and alcohol addictions in the sleaziest possible way. This book is disingenuous and miserable propaganda. That is all.

I really enjoyed this reading. I think I enjoyed more than I normally would for a few reasons, one being that I have family that are similar to J.D.’s and are hillbilly transplants that moved to Ohio but have Appalachian roots. Second that I saw the Netflix movie and really enjoyed that before diving in, so I had faces and voices to go along with all the characters. I really enjoyed the beginning where J.D. includes sociology and historical facts among his childhood to add some depth to his experiences. I do recommend this read to any one living in Ohio who is interested in sociology.

JD Vance tells the story of his life growing up as a 'hillbilly'. He was very poor, lived with his grandparents most of the time because his mother had problems with drugs and men. His father was out of his life. Through determination on his part and the love of his grandparents he graduated from Yale Law. he shares many things he learned along the way and credits his time in the Marines with achieving maturity.

This is not a comment about content as I found it an interesting commentary on the subject. As a self-proclaimed aficionado of recorded books, I say Vance was a terrible, terrible narrator. Very seldom can an author do justice to their work by doing the narration and this was NO exception. He should have had this decent story presented by a professional.

The last few chapters were the most important read for me as they reflected so much of my life.

According to stereotype, Hillbillies, people of the Appalachian, are uneducated, unemployed, and unmotivated. Abandoned when factories left the Steel Belt, they suffer from a high rate of drug usage and domestic violence and, despite the decades that have passed, things don’t seem to be getting better.⁣
⁣
In his memoir, Vance describes his experience as a third-generation Hillbilly. His grandparents had profited from the economic prosperity of the Steel Belt, but now they were also collaterally damaged by its collapse. Vance’s grandfather was an alcoholic, his mother a drug abuser, and in his most helpless moments, a young Vance had to lie in court to avoid being put into foster care. ⁣
⁣
On one hand, Vance’s story sounds like the epitome of the American Dream. He eventually attended Yale Law School, leaping over socioeconomic barriers and lifestyle changes. On the other hand, his identity still haunted him: he had anger issues and trouble maintaining long-term relationships. Yet he acknowledged that he was already fortunate for having caring grandparents. What about those who did not have role models? He asked. How would the majority of Hillbilly posterity have a future? ⁣
⁣
As a 1.5 generation immigrant to Canada and once an international students in the States, I identified with our author to a surprising degree. I still find myself at a loss during certain Western social situations and testing the waters academically and professionally. In a way, Vance is as much of an immigrant as I am; the cultural shocks and insecurities he had suffered were not any less jarring. ⁣
⁣
I had already read about the Hillbillies in works such as Dopesick and Good Economics in Hard Times, but Vance really humanized the families and communities that would otherwise have just been statistics. We can say the suicide rate is X and the drug usage rate is Y, but behind these numbers are families fleeing from their pasts and children struggling for a future.

On Netflix right now.....heartbreaking to watch, but worth it!

Understanding others, at least trying to, is important I think. This book was a reminder that not everyone in the US is born with all the breaks but much is still possible in this country. Change is the one constant we all face no matter what.
And how important a Grandmother’s love is.

I like very much like what you have done to provide a accurate summary description of a book and provided comments from other readers. I am a loyal non-fiction reader and want to know about the author as well as the theme of the book.

Coarse Language: Lots of swearing, but always in context of the larger argument presented by author.

bell5133 thinks this title is suitable for 13 years and over

bell5133 thinks this title is suitable for 10 years and over

LThomas_Library thinks this title is suitable for 17 years and over

chrstphrbrwn thinks this title is suitable for 16 years and over

runningbeat thinks this title is suitable for 16 years and over

“No person’s childhood gives him or her a perpetual moral get-out-of-jail-free card.” (334)

“whenever people ask me what I’d most like to change about the white working class, I say, “The feeling that our choices don’t matter.”
― J.D. Vance, Hillbilly Elegy: A Memoir of a Family and Culture in Crisis

In Hillbilly Elegy, J.D. Vance tells the true story of what a social, regional, and class decline feels like when you were born with it hanging around your neck. A deeply moving memoir, with its share of humor and vividly colorful figures, Hillbilly Elegy is the story of how upward mobility really feels. And it is an urgent and troubling meditation on the loss of the American dream for a large segment of this country.

Loading...
Powered by BiblioCommons, in partnership with the British Columbia Library Association, and with the financial support of the Province of British Columbia.
BiblioCore: app13 Version 8.37.3 Last updated 2021/05/04 15:03
[]
[]
Close Dialog